This article provides an update on how the Province, the Provincial Charitable Incorporated Organisation [FCYNER], York Minster and the University of York are working together to assist young people to achieve their ambitions and contributing to maintaining the iconic York Minster whilst at the same time assisting to raise public awareness of Freemasonry.

Entered Apprentices
The Winter edition of Yorkshire North and East Newsletter, the Yorkshire Mason, gave a background to the Provinces involvement in the York Minster apprenticeship scheme which started in 2016. Things continue to progress with the working tools initiative attracting a significant level of enthusiasm by Lodges, Chapters and individual members who are anxious to support each new apprentice by the presentation of a high-quality set of tools which will last them a lifetime.

It seems that contributing to something where you can see what you have funded and how it is of immediate benefit makes the giving somehow more special. In the summer of 2017 apprentice James Digger received his set of tools from the combined support of the Filey Lodges. This year on the 26 September lodges from Guisborough, Redcar and Saltburn visited the stone, accompanied by the Provincial Grand Master and the Second Grand Principal, to enjoy a guided tour and see the stone mason’s work at close quarters, 80 feet up in fact! 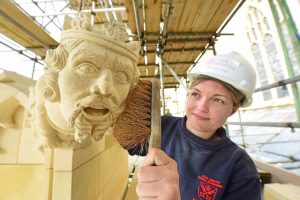 They met this year’s apprentice Emma Waitzmann,  presented her with her set of tools and saw her already putting them to good use.

John Davies and Keith Roberts have between them engendered such an interest in this initiative that they are already building up funds for 2019 and beyond as Lodges in other parts of the Province join the list of those wanting to contribute in the future. This is now a firmly established Provincial initiative which it is hoped will be emulated in other Provinces as word of what we are doing reaches the media.

Stone Carving Festival
The Provinces involvement is not limited to the working tools. We are continuing to find new ways of working with the Minster and now the University. On the 18/19 August our support for the Stone Yard was rewarded by being invited to join the York Minster Fund at the 2018 Stone Carving Festival where the Province shared a gazebo with the Fund close to the entrance to the venue. ‘Throughout the two days a constant stream of visitors, at times almost too many to count, visited to watch, talk to and marvel at the incredible skill of the carvers’ The Festival, held in Dean’s Park, attracted some seventy operative stone masons from all over the world. They were given just sixteen hours to carve a piece to their own design based on the theme of ‘All Creatures Great and Small’.
Smooth blocks of sandstone were transformed over two days into incredible works of art which were then auctioned before a large crowd of enthusiastic bidders. As a mark of the talent of the masons the auction raised some £12k on behalf of the Minster restoration fund. Numerous visitors took the opportunity to speak with the small group of members of the Province who were there over the two days, whilst a large number also visited Duncombe Place to tour the building. 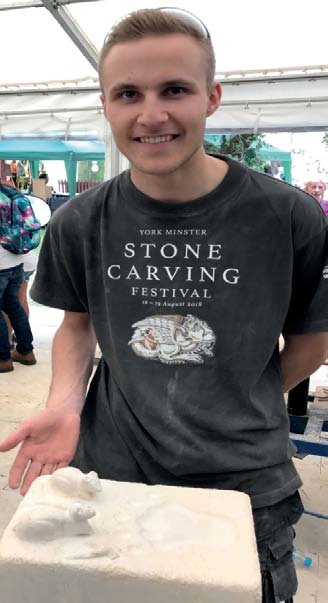 One of the carvers was James Digger  who, just one year into his apprenticeship, gave his interpretation of ‘great and small’ as two small mice staring at a huge paw print. Good use of a set of working tools!

The Stone Carving Festival
This presented a golden opportunity for the Province to become involved by helping to host the carvers and to provide prizes for those apprentices who participated. Prizes were sponsored by various organisations and were awarded in several categories including the people’s choice and the carver’s choice. Imagine what it must feel like for your work to be
selected as a winner when it was chosen by your peers! In the apprentice category five young people, some on home ground and some from further away, pitted their skills against those with more experience, and they produced some stunning pieces of work. Prizes in this category were presented by AsstProvGM Sam Judah, seen here with John Davies and Keith Roberts.  John is seen here sporting his sponsor’s tee shirt, which he was wearing throughout the two days, beneath his jacket!

Beyond the Stonework
It’s not just the stone of the Minster which gives it its unique place as a heritage site of course but also its stained glass. Recent developments will now see us working with the University and Minster together. A successful submission to FCYNER resulted in support in the form of two £2500 bursaries to Emily Price and Matthew Nickels, second year post-graduate students studying for MA’s in Medieval Conservation, who will be working on aspects of the Minster’s stained glass. The FCNYER’s support will hopefully assist them worrying a little less about keeping body and soul together and devoting their time to pursuing their studies. Our link with the University’s Dr Sarah Brown, who is a world authority on medieval stained glass and chairman of the Glaziers Trust, is already starting to pave the way for some interesting future developments. 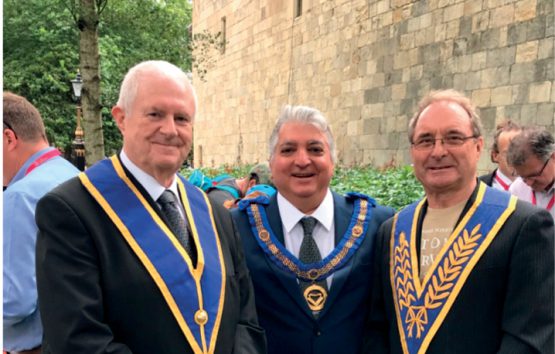 Where next?
Arrangements are being put in place, once the students have settled into their research, for them to speak at one or more Lodges on their work, along with an academic supervisor. Properly advertised this should create some inter-Lodge visiting. The apprentice stone masons may also be able to join Keith Roberts as he visits Lodges to give his presentation on the stone yard as he champions the working tools initiative. Those of you who have been to Grand Lodge and heard the short presentations by those who have received support will know how rewarding it is hearing young people enthusing about their work and interests and how it impacts on the wider public. Taking this on board, at next year’s Provincial Meeting, we will host James and Emma, together with two members of the York Minster Fund and the stone yard. Joining them will be Emily and Matthew together with Dr Sarah Brown from the University. They will make a short presentation and then join us for lunch . Turning to what might be considered the ‘big plan’. The MCF funding for apprentices runs out in – 2019. The idea suggested in the last Yorkshire Mason was for a YN&ER apprentice for 2020 funded by each Lodge and Chapter which feels able to commit £100 a year. The young person appointed would be known as the YN&ER Stone Mason Apprentice, whose progress we could follow and importantly be a part of.

What’s in the pipeline?
There is no doubt that historically Freemasonry is inextricably linked to the city of York which in the public’s mind is arguably synonymous with the Minster. It is inevitable therefore that, as a Province, we should identify with the Minster and its activities, particularly the stone yard, with which we have such an obvious affinity. Taking this forward, together with the new initiative with the University of York, we are currently exploring the potential for a joint conference next year which will look at the Minster as a building, its archaeology, its construction and maintenance and incorporating the development and role of Freemasonry in the City of York via which we can hopefully show how we have had, and continue to play, a part in what York is today.

A conference will provide a further opportunity to stress not only our current commitment to local communities as well as reminding the public of the role we have played in the past and how we intend to continue to do so in the future. ‘Combined with our support at the University the Province is doing what the Assistant Grand Master complimented us on and ‘progressing through quiet visibility’ At our Provincial meeting in May, the Assistant Grand Master, Sir David Wootton, complimented us on our activities in York. Lodges and Chapters are without doubt clearly committed to the stonemason apprentices. With that commitment in mind it is hoped that, with what might be thought to be an easy task compared to what was achieved during the 2018 Festival, each Lodge and Chapter will be able to raise £100 per annum so that we can secure our own stonemason apprentice and see them progress.

With the support of Lodges and Chapters we will continue to make our presence felt, have the pleasure of knowing we have assisted several talented young people to make their way in life, helped to preserve a national icon, and have added to the public’s perception of what we stand for as members of the Craft.